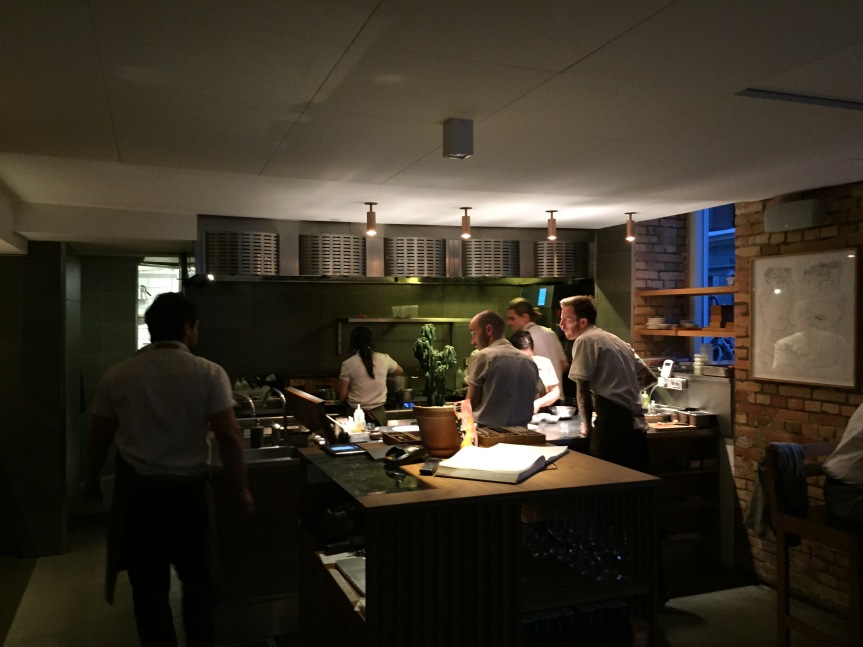 A few months ago I put up a post about a Michelin star restaurant in Copenhagen called Restaurant Relae.  I had read they were considered one of the world’s most environmentally friendly restaurants and was impressed with the Sustainability Report they had produced.  Fast forward to today and I’m in Copenhagen attending the International Conference on Culinary Arts and Science. Last night I went to Relae and everything has changed!

Relae has good food, is environmentally responsible, but more than anything they are on the cutting edge of innovation when it comes to a restaurant business model.  This restaurant has created and is living a new way of doing things that I’ve been dreaming about for a few years.  You see at Relae, there is only one house, there is no divide!

Walk in the restaurant and you are pretty much in the kitchen, there is no physical barrier between the front and back and more importantly there is only one team. Everyone is wearing the same uniform (long bib apron and shirt) including one of the owners who we met at the end of our meal.  For the 3 hours we watched the Relae team perform we couldn’t figure out who was filling what role, it was even hard to figure out who was in charge.  People that were serving us our food were on the line cooking two minutes later.  There were two people that strictly took the order and served the wine (servers) but the other 11 members of the team all had a culinary background and were somehow involved in the preparation of food for the evening. Did I mention they didn’t have a ‘hostess’, and yes they have a Michelin star.  There was also no ‘management’ as we know it in North America. The owner was one of the people taking the orders and the Sous Chef as mentioned earlier was helping run food. I’ll also note that Head Chef wasn’t working on a Friday night!

This new way of designing how work is divided in a restaurant is one of the key elements that Relae is capitalizing on in this new model.  By minimizing ‘roles’, challenging convention, and sharing duties Relae has produced the most efficient and productive restaurant team I have seen in my life. The team was tight, orchestrated and focused, creating such an efficient flow that there were no gaps in our eleven course meal.  Beyond efficiency the service was also very engaged.  One course was delivered by a young woman from Brazil with a culinary background, the next from the Australian Sous Chef and so on. These people had expertise in describing the dishes but also possessed an energy and enthusiasm about them…..they were engaged and it created a better dining experience.

I will put forward that the three biggest benefits from this new model are:

Now if this sounds to you like the same issues traditional full-service restaurants are struggling with then you are not alone.  To learn more about this concept of ‘One House’ visit the blog again on July 17th for the first installment of our new podcast series entitled One House.  We’ll be chatting with some iconic and innovate operators and chefs first-hand about the new direction restaurants need to be headed in.